I once saw a television show about child prodigies. One of the interesting things they talked about was that we see what we are looking for. If we are only looking for children who are super good in math or science or even in athletics, we fail to see or appreciate children with a remarkable gift for say compassion. One of the analogies offered was that if you go into a grocery store with a small list, you will only come out with a small number of items. [Obviously none of those people had ever met me, but I digress…]

In genealogy when we are looking for something specific, we can fail to notice interesting facts that aren’t related to our current inquiry. I’ve learned this lesson before, but as with many lessons, apparently I needed to learn it again. So here’s the story – or maybe more of a confession – of how I solved a “brick wall” starting with information that was in my own files. [It’s in quotes specifically for James Tanner who has blog about this concept a number of times including here.] 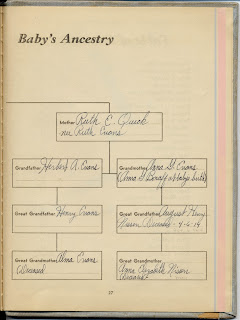 This particular brick wall is named Herbert Amos Evans. He is my great-grandfather – the father of my mother’s birth mother, Ruth Evans. I really didn’t expect this branch to be so problematic. My mother's birth certificate shows her mother as Ruth Penrose Evans, who is listed as being born in Broomfield, Colorado. On top of that I have my mother's baby book with the section for "Baby's Ancestry" nicely filled out.  So tracing this line should be a piece of cake, right? Nope, not even close.

The first dilemma was that while Ruth was born in Colorado I was unable to find an Evans family that looked right in the 1910 or 1920 census in the Denver area . The first time I searched I was immediately rewarded with a family that had a “Ruth” of exactly the correct age. Unfortunately the parents were all wrong as was the information on where everyone had been born. This was a nice Welsh family that I could trace forward and back – NOT my Evans family. I also searched for the Evans parents listed, Henry and Alma, thinking that possibly they also lived in Colorado – no such luck.

Years went by from the time I did that first search and then one day as I was searching on the Colorado State Archives site for my Colorado grandparents' divorce. I typed in “Evans, Anna” – Herbert’s wife – on a lark and there was a divorce case listed! I felt fairly confident, in spite of the common name because the husband was listed as Hurbert A and Anna was listed as “Anna Gertrude” and finally the timing was so perfect. It was not going to be cheap – I actually called the Archives before I ordered to find out what I was signing up for – but I HAD to have this information so off went the check.

After waiting an eternity in genealogy time, which was about a week or two in calendar time, I received a thick packet in the mail. I tore into it and rapidly read through the contents with things jumping out at me like, “married in Shoshone, Idaho” and “deserted me in Portland, Oregon” and “gave me money to return to my father’s home in Broomfield.” My head was spinning to say the least. Because Gertrude was born in Colorado, as was her daughter, it never occurred to me to look anywhere else. Here she had been roaming around other states getting married and having children!

With this information I was able to find Gertrude in 1910 in the Oregon census with her husband and first child (who had been born in Oregon.) I also found a marriage record for the couple in Idaho although originally I found just an index. It wasn’t until quite a number of years later that the image was on-line.   It allowed me to see that this was not a first marriage for Herbert and that he listed his birthplace as Minnesota.

But I was happily on Gertrude’s trail now and traced her through 3 more marriages right up to the 1940 census. Herbert was another case however – my “brick wall.” Before I saw the image of the marriage record I was working with what would later prove to be a false hypothesis that he was the Herbert Evans in the Colorado census of 1900. I even blogged about it.   The age was right and I figured that he and Gertrude ran off to Idaho to get married. Even with the Minnesota information, it wasn’t clear. I did find a few possibly matched in early Minnesota censuses, but was pretty much resigned to him being my dead end.

Then I signed up for one of Michael John Neill’s classes on “Organizing Genealogical Information” Mostly because of Susan Petersen’s Organized Genealogist website and Facebook group  the title just caught my eye. Tomorrow I’ll thrill you with the tale of my actual discovery as a result of our first homework assignment.

Posted by Diana Ritchie at 8:55 PM