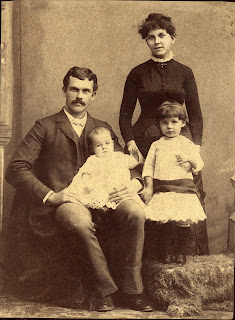 I am fortunate to have many pictures from my Grandpa Quick’s photo albums. The birthday theme reminded me that there was a picture of someone’s 75th birthday but I couldn’t remember exactly who it was. When I found it, it was for HIS grandmother, Nellie (Auflick) Eickelberg.

In spite of the fact that the details above show that she was born and died in Ohio, she lived in Colorado from 1887, when her son (the baby in this picture) was born up until her death.  She was visiting friends in Ohio when she died in 1940, but she is buried in Fairmount Cemetery in Denver.

Here she is, (in Colorado) celebrating her 75th birthday. 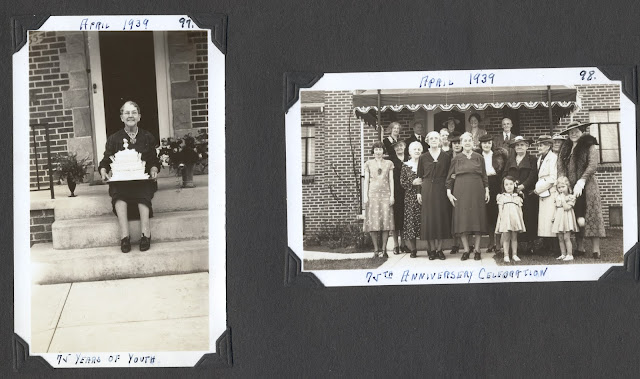 First just the facts:
Name: Jakob Zaugg, Sr [as the head of the family, I’ll start with him]
Born: 21-Feb-1795* Bern, Switzerland
Married: Anna Stetler, 23-Jun-1820, Eggiwil, Bern, Switzerland
Died: 09-Dec-1873, Mount Eaton, Wayne County, Ohio
*This is a calculated date based on the description in Wayne Co records of Jacob being 78yr 9mo 18days when he died.

In May,1853, Jakob, his wife and all but one of their children ventured from Switzerland across the ocean to settle in Wayne County, Ohio.  This group included their eldest son, also Jakob/Jacob who was then married and had a 6-month-old son named, originally, Jakob/Jacob! The exception was their eldest daughter who, with her husband, would follow them just one month later.

Wayne County had a large Swiss population so the destination made sense and I can only assume that they knew people already living there.  Still, it seems hard to imagine that at almost 60 Jakob would be prepared to start over.  But this fresh start would work out well for the couple.  When Jakob died, he had enough property and money to leave something to all his then-living children. 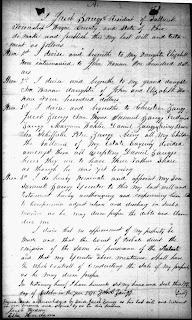 In writing this I wanted to pull the passenger list and was dismayed to find it almost totally illegible on Ancestry.  However the same record on Family Search is very clear.  Here is a side-by-side comparison. 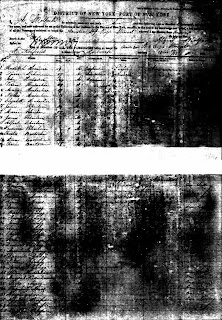 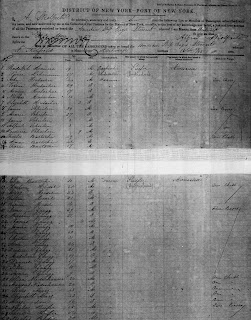 In looking at the clearer version on Family Search I saw something I'd never noticed before - the Bartschi family listed above.  Jacob Zaugg, the young married man, is my 3rd great-grandfather and his wife is Barbara Batschi but I'd never done much about looking for her parents.  Could this be her family?  Now I have something else I need to explore.  It always happens when I try to write anything - I discover all the holes and unexplored clues.

Week 13: In the Paper
"Newspapers are fantastic resources for our family history because they are contemporary recordings of our ancestors' times. We can see the news that affected them. (And that's not even considering the obituaries, marriage notices, and news articles that actually mention our ancestors!) What discoveries have you made in newspapers?”

Relationship: Great-grandmother
I am descended through:
- her son, Jack H Quick (1911 - 1999)
- his daughter, my mother, Jacqulin Ann Quick (living)

This prompt just ‘spoke’ to me. I have the most wonderful article that I found quite unexpectedly. I had been searching for articles about my great-great-grandfather, William Eickelberg who lived in Colorado. He was, at one time, the deputy inspector of mines and he also owned a restaurant so I was finding a number of interesting things. And then this popped up in the Denver Post, November 11, 1901 page 8: 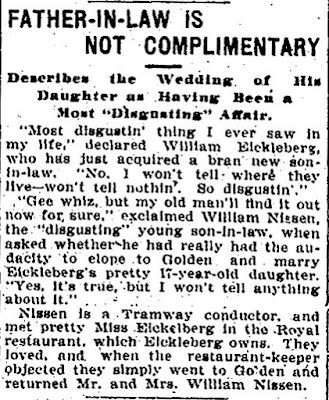 Wow - that was not what I was expecting!

In spite of this romantic beginning, the relationship would not end well. When their son Harry was 6 years old the couple would divorce. In the complaint Nelle would state that her husband had, “…willfully deserted and abandoned this plaintiff on the 10th day of January 1908…” It looks like in this case father really did "know best". 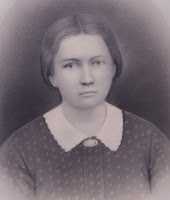 Caroline was the source of my first truly thrilling genealogy find. I had just started to seriously research. By "seriously" I mean actually looking for records to back up all the information I had collected over the years from talking to my relatives. I had quite a bit of information at this point because I just loved looking at old pictures and, of course, when people show you pictures they tell you about them.

On a trip to Apple Creek, Ohio to visit relatives I decided to run over to the court house in Wooster. Not really knowing what I was doing at this point I was fortunate that the person there was very helpful and pointed me to some indexes which had been published by the local historical society. I happily looked up births for quite some time and made copious notes. I found more children listed for Caroline and John Saurer then I was previously aware they had. On an interesting side note, I was told that the original birth registers were not available to look at as they were too fragile. Now those same records are available to view on Family Search!

Next I decided to look for marriage records and bingo! There was a listing for John Saurer and Caroline FLORY. I felt so proud of myself ~ an actual new piece of information that no one else in my family had been able to tell me – Caroline’s maiden name. That, however, wasn't even the thrilling part. This was just the index so I asked the nice lady about the actual record and she showed me where the big ledger-type books were kept. I looked up the record and nearly fell off my chair. The record had some writing next to Caroline name which was HER FATHER'S consent to the marriage because she was only 16! So, right there I was able to go back another generation. If that wasn't cool enough, I also found and was able to make copies of her father's will.

WOW! I was totally hooked for life. Of course I soon found out that not every single trip to a courthouse was going to yield up such treasures. I don't mind though. Looking at old records just fascinates me almost as much as looking as old pictures. It's a way of touching history.

Written for Genealogy Photo A Day ~ a list of photo prompts provided by Genealogy Girl Talks. 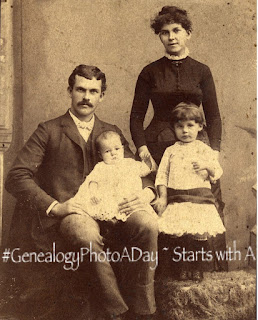 Although Nellie was born and died in Ohio, the picture here was taken in Denver in 1887 and Colorado is where she lived most of her adult life.  I'd always assumed it was where she'd died until I did some actual research. I even blogged about it way back when I made the discovery.

I have many pictures of Nellie so it was hard to choose one to share. 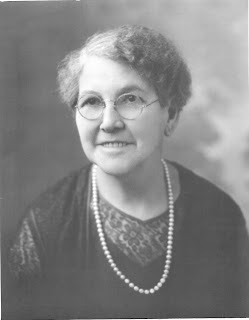 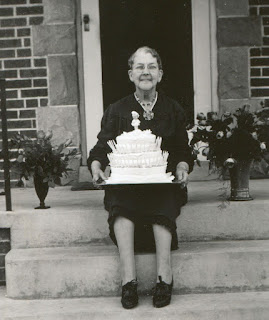 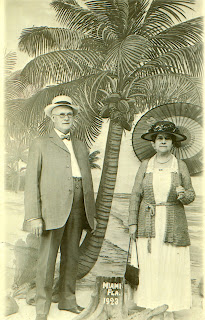 The last picture is Nellie at her 70th birthday.

Her parents, Thomas Auflick and Margaret Ann Hannington also eventually moved out to Colorado and are buried in Lafayette, Colorado. If I'd had a picture of them I'd have chosen that for this prompt. I've always felt there SHOULD be a picture of this couple. It's certainly on my most wanted list.